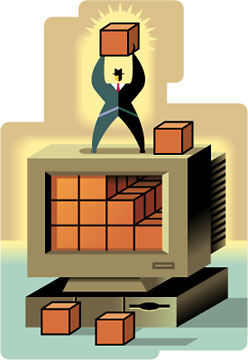 Dave was born in York, PA., and began his freelance career at the age of 8, getting paid $1 for each drawing published in the local newspaper. “I didn’t have an agent at the time, or I’m sure I could have gotten at least $2″. He has been making art ever since. He graduated from Tyler School of Art in 1982,moved west, and spent 8 yrs. working as a staff artist for the Oakland Tribune and San Francisco Examiner newspapers. His life as a news artist included creating everything from logos and info graphics to editorial illustration.” I learned to work quickly, and in various styles to accommodate a wide variety of subject matter.” During this time he began creating electronically, the method he uses today.” There is a zen-like quality creating with vector graphics… trying to get the most efficient and elegant line with the fewest points.” Dave quit the paper biz in 1994 and has been freelancing since that time. When not in his studio you can find him, cycling, skiing, or practicing his freethrows.